With that in mind, some names of hands might be wrong/ mis translated/ not used properly. Also I might have missed some rule nuances. But what I have is an enjoyable Korean variant of essentially, Stud (Seotda... Sutda... Stud? Maybe a connection?).
​
Seotda ( 섯다) Literally means " It Is" and is essentially 2 card stud, or as my Partner's family likes to call it " You get what you get".
This is a betting game, and while it uses the Hanafuda/ Hwatu deck, it's assembled differently, only using 20 cards. I'll go into this later.

I find it extremely interesting that many Hwatu decks I own have numbers on them (1's on January cards, 2's on February etc.) So far only Seotda has used these numerical values for their scoring, which has lead me to believe that it must have been popular enough of a game to effect future printing of Hwatu. But for being so popular, it is extremely hard to find any english information on this game. So if I have any Korean readers who would like to weigh in on this, it'd be greatly appreciated. It seems like a well kept, enjoyable secret. Or maybe it's because it's so similar to 2 card stud?
Before play, it's important to agree on a starting bet rate, like with poker. 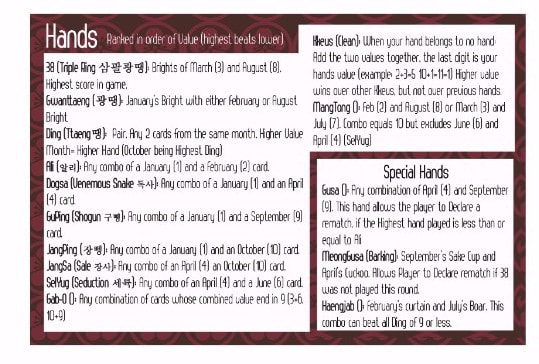 ​Origin: Korea
Players:2-10
Game Style: Poker
Length of Play: unlimited
Number of Decks: One edited deck.
Goal: Have the highest scoring hand
Setting up the Deck:
In Seotda, the deck consists of 20 cards. This deck is made by:
Discarding November and December, and only using the Animal cards, and ribbon cards of January through October. However January and March have no animals, so the deck used their brights, and August has no Ribbon, so the deck also uses it's Bright.

Gusa ( 구사): Any combination of April (4) and September (9). This hand allows the player to Declare a rematch, if the Highest hand played is less than or equal to Ali
MeongGusa (Barking멍텅구리 구사): September’s Sake Cup and April’s Cuckoo. Allows Player to Declare rematch if 38 was not played this round.
Haengjab (땡잡이): February’s curtain and July’s Boar. This combo can beat all Ding of 9 or less.